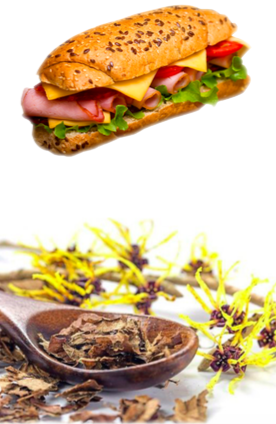 What’s in a Name? Did you ever wonder why certain names were given to things that just didn’t make any sense to you?

Take the word sandwich. Millions of sandwiches are eaten around the world everyday yet what does the name have to do with what you see before you? Luckily there is no sand involved in a sandwich.
The best answer out there originated in England by a man of Title. It refers to the 4th Earl of Sandwich, John Montagu, referenced in a journal by Edward Gibbon in 1762. The journal told of how Montagu was very fond of cards and gambling and that he didn’t want to leave his cards on the table and break for dinner so he asked the servant to give him a piece of meat and slap two slices of bread on them and bring it to him. He played cards so much that stopping to eat dinner was inconvenient for him. He inadvertently invented the portable meal, hence the sandwich!
Witch hazel -We all probably have some in our medicine cabinet but did you ever wonder how it got its name? Witch hazel is a very versatile remedy, with generally accepted uses ranging from facial care to sooth- ing aching feet. It is also used for the treatment of hemorrhoids, inflammation of the mouth and throat, and other conditions, such as varicose veins, wounds, and burns. Witch hazel has so many applications its even recommended to ease the pain of sunburn, windburn, insect bites, poison ivy blisters, and sore and sprained muscles. The medicinal element of witch hazel is the hamamelis water that is distilled, decocted, or tinctured from fresh and dried leaves, and fresh and dried bark and twigs. Tannins and volatile oils are the primary active ingredients of witch hazel that contribute to its astringent benefits. The tannin content of witch hazel leaves is 8%, and in witch hazel bark ranges from 1–3%, as the medicine derived from the bark will yield a higher tannin concentration than that from leaves. Recent research done in Asia indicates that it is the tannin content of witch hazel that is chiefly responsible for its strong antioxidant activity.
(Hamamelis virginiana ) is a deciduous tree or shrub that is native to Atlantic North America, and it is
now also cultivated in Europe and Asia. The shrub can reach a height of 15 ft (4.6 m). It flowers in the fall, producing vivid yellow flowers. Witch hazel is also known as hazel nut, snapping hazel, spotted alder, tobacco wood, winterbloom, and hamamelis water. Native Americans used witch hazel leaves and bark as a poultice to reduce swelling and inflammation. Those are among the uses of this herb that has long been among the best known and widely used home remedies. The word “witch” in the name of the herb is actually a derivative from the Anglo-Saxon word wych meaning flexible. The word described the flexibility of the branches that Native Americans used to make bows and for divining rods. Native Americans regarded witch hazel as a general tonic. They also brewed witch hazel as a tea for conditions including cuts, colds, heavy menstruation, tumors, and eye inflammation. (Though it is not advisable to be used internally.)
Hamburger– no, a hamburger does not have any ham in it. In the early 1800s, a German merchant noticed that the nomadic Tartars softened their meat by keeping it under their saddles. The motion of the horse pounded the meat to bits. The Tartars would then scrape it together and season it for eating. The idea of pounded beef found its way back to the merchant’s home town of Hamburg where cooks broiled the meat and referred to it as it as Hamburg meat.
German immigrants introduced the recipe to the U.S. The term “hamburger” is believed to have appeared in 1834 on the menu from Delmonico’s restaurant in New York but there is no surviving recipe for the meal. The first mention in print of “Hamburg steak” was made in 1884 in the Boston Evening Journal.
The honor of producing the first proper hamburger goes to Charlie Nagreen of Seymour, Wisconsin, USA.
In 1885 Nagreen introduced the American hamburger at the Outgamie County Fair in Seymour. (Seymour
is recognized as the hamburger capital of the world.) However, there is another claim to that throne. There
is an account of Frank and Charles Menches who, also in 1885, went to the Hamburg, New York county fair to prepare their famous pork sausage sand- wiches. But since the local meat market was out of pork sausage, they used ground beef instead. Alas, another hamburger.
The first account of serving ground meat patties on buns – taking on the look of the hamburger as we know it today – took place in 1904 at the St. Louis World Fair. But it was many years later, in 1921, that an enterprising cook from Wichita, Kansas, Walt Anderson, introduced the concept of the hamburg- er restaurant. He convinced financier Billy Ingram to invest $700 to create The White Castle hamburger chain. It was an instant success. The rest of the history, we might say, belongs to McDonald’s.