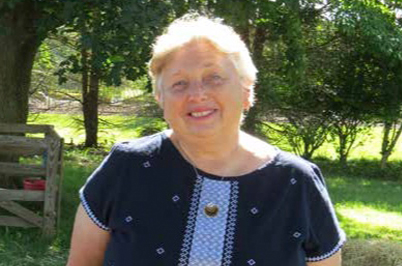 Published on July 1, 2017 by Gunther Publishing 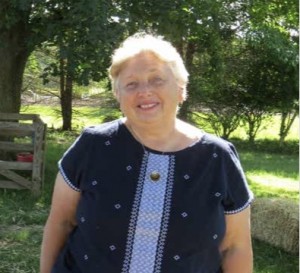 Patricia (Pat) Butch has done a lot for the Millstone Community in her quest to save historic homes, and preserve Green Acres farmland, in both this town and throughout the County of Monmouth. With her skill in grant writing, she has procured the necessary money needed to help restore historic properties throughout the area.

Pat lived in North Brunswick before moving to Millstone Township in 1990. She taught Special Education for 25 years in South Brunswick. As North Brunswick began to lose its rural appeal, she and her husband decided it was time for a change. Pat wanted to live on a farm where she could raise and show horses. She now lives in a beautiful old farmhouse, circa 1700’s, complete with horse barns and lots of land to ride on. She also breeds Romney sheep for their wool. Pat has a son and a daughter and four grandchildren that she a ectionately dotes on. She loves being a big part of her grandchildren’s lives.

In 2003, she joined the Open Space Committee and a year later was the chairperson for the committee. She has recently gone back to the Committee and serves as its vice chairman.

In 2011, Pat, town historian Joann Kelty, and Frank Curcio, were curious and wanted to do some further exploration of a few of the town properties. e rst being the old Allen house and the two barns that were on the property. e buildings were slated to be torn down to make way for the new Senior Housing Units that are there now. Everything was going to be sent to the land ll, but the trio saw that the two barns were in good sound structure and intact and asked if they could somehow work on preserving them. Pat called the New Jersey Barn Company to have them accessed. e beams, timber, joints were sound enough to be saved.

It was during this time that the three decided to form the Friends of Millstone Historic Registered Properties. e Friends, (MTHRP) are a non-pro t group organization dedicated to furthering public interest in conservation, preservation, knowledge, understanding and appreciation of the history of Millstone Township. Before long, people with similar interest joined up and the group began to take form. e wood from the two Allen barns were used in the building of the barns that are presently on the Baird Homestead.

Also during this time period, the township bought the Wagner Farm Homestead, on Baird Road, which is now the omas Baird Homestead Educational Center. e Friends group asked to work with the township toward a preservation project to restore the home. A non- pro t organization was formed and Pat delved into writing grant upon grant to help procure money to make the Baird Homestead Educational Center a reality. Her passion for these projects is clearly evident on her grant applications and the Friends managed to get the grants they needed. ey got money from the Open Space Commission, State Green Acres, the Monmouth Conservation Foundation, and Millstone Township. e Baird House serves as a true testament to the workings and visions that Pat and the other members on the Friends of Millstone Committee had when they took on this project. e home is now open to the public and used as an Educational Center.

e Friends of Millstone got involved with the NJ Museum of Agricultural on the Rutgers compass, which recently closed due to lack of funding, and received over 400 items on a permanent loan that are displayed at the Baird House. e 6,7, and 8th grade students from the Millstone Middle School frequent the grounds yearly with special planned class trips lled with hands on activities related to what they have been learning all year in school. Pat oversees this event. One can see her genuine love for children and for teaching with all the programs that she puts together and host. e girl scouts and boy scouts do silver and gold awards and Eagle Scout have made projects on the grounds.

e Friends were also interested in restoring the Clarksburg Methodist Church, which was wasting away in disrepair. e church dates back to 1844 and is listed on the State and National Registry of Historic places. e doors closed on the church in 1989. e Township bought the property for a dollar. is was another old structure slated for demolition. Again, Pat spun her magic with her passionate grant writing. e recent restoration project began in the spring of 2016 to address structural issues at the foundation and attic raers. e project was made possible with the support of the Monmouth County Freeholders through the Monmouth County Municipal Open Space Grant, and the Monmouth County Historical Commission Grant. ere is still a little more work leto be done but, once again, thanks to Pat’s grant writing, her time and devotion, along with the township appointed church steward and Millstone residents, Doreen Polhemus and her husband, the church will once again be used for community events and educational programs. is past June an ice cream social was held and the community was invited in to see the progress on the church.

Pat will be the rst one to downplay her role in the success of the restoration of the historic buildings. She credits those on the Friends of Millstone Committee, the township, and the friends of the friends who have been by her side throughout the whole experience. e happy ending for Pat is seeing the townspeople enjoy the end result. Restoring the Church and the Baird Home is something that the whole community will bene t from. What was most exciting to Pat was how many more people have stepped up to volunteer to help. “Seeing people coming aboard volunteering more and wanting to be more involved, means the world to me.” She stated. “ ey have added to getting the Ball rolling.”

e icing on the cake is the warm and receptive acknowledgment from the very people who were part of the grant decision-making process coming out to see the fruitions of the Friends hard work and of the proud woman who stands with them representing our townships heritage. Knowing Pat for a few years now, I come to realize that she is probably the most seless person I have ever met. She is not afraid to get the necessary paperwork done, no matter how stressful or time consuming it is. A perfectionist at best, she has done a great job overseeing the steps that have to be taken to get the job done. She is a woman who wears many hats and wears them well.

Pat is President of the Friends of Millstone Historic Registered Properties. She also is the Vice Chair for the Monmouth County Agricultural Development Committee, preserving farmland all over the county.

We thank you Pat for your time and knowledge in working towards preserving the township’s history for all to enjoy! Thanks for being a neighbor and a friend to all!