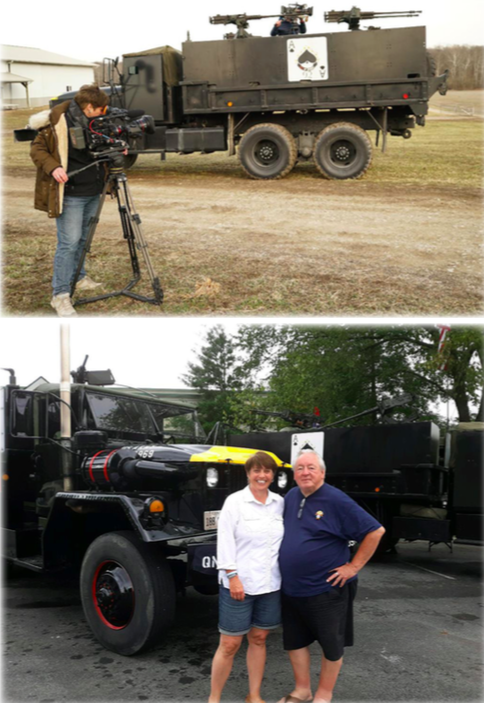 When the Smithsonian Channel airs the premiere of the hour long documentary that tells the little-known story of the gun trucks of Vietnam, Bayshore native Tom Veth will be able to sit back and take a bit of pride in its production.
Sharing the feeling is Beth Garrigal, owner of Garrigal Productions of West Long Branch. She functioned as the producer and camera operator of this vivid account of the little-known actions and trucks that saved the lives of untold numbers of American military men during the last years of the Vietnam War.
“The Gun Trucks of Vietnam,” documentary was produced in cooperation with Austin Street Productions, a New York based firm that specializes in post- production development for both cable television and on-line programming. Austin Street has worked extensively with the Smithsonian Channel, as well as the National Geographic, Animal Planet and Discovery channels.
The production will air on the Smithsonian channel this Veterans Day, November 11 at 9pm. In addition, there will be formal ceremonies in Washington DC the following day in which those heroes who told their stories will be honored.
The film is the story of how hundreds of enlisted men assigned to transportation units of the Army, modified whatever manner of two and a half ton and five ton trucks they could manage to secure for their unit. Working with other soldiers, they built fortress strength boxes on the backs of the trucks to house larger weapons and other artillery. This enabled them to secure safer passage through the Vietnam jungles while avoiding enemy fire in order to bring supplies to troops in the field.
Veth, a Certified Professional Accountant with an office in Atlantic Highlands, served in the US Navy from 1968 through 1971. Despite volunteering three times to go to Vietnam, he was never assigned to a ship that saw duty in the Asian theater. Supporting, financing and interviewing veterans who were on the gun trucks have been a labor of love for him. He is happy, he said, to be repaying, at least in a small part, the veterans who did serve in the war arenas. It also has particular meaning to Veth as he had high school classmates and friends who served, and in some cases, made the ultimate sacrifice in Vietnam.
Garrigal, who was a youngster during the Vietnam War, said Veth was responsible for breaking the ice between her and the Vietnam veterans. Some were wary of her youth and in turn were reluctant to open up and talk about their horrific experiences and the reaction of many Americans to their service. Sharing a bond with Veth enabled them to build a trust in Garrigal that ensured detailed and revealing stories about their experiences.
With more than two decades in the film production industry, Garrigal created
her own company in 2008. She also finds time to support the community,
including serving as a member of the Shore Regional Board of Education for the past ten years. Although she never served in the military, she said she explained why she chose to produce the gun truck story in a documentary.
“It is an inspiring story and I feel proud to be a part of making it known to all Americans,” Garrigal offered. “Because of the bravery and ingenuity of the men who designed these trucks, often times with the winking eye of an officer, they dedicated themselves out of the sheer love and camaraderie they shared with their fellow soldiers.”
Smithsonian purchased the rights to the documentary, which explains why Garrigal cannot present the film for local veterans or fraternal organizations or in local theaters.
Both Veth and Garrigal say they can never forget the five years they have taken crisscrossing the country and interviewing more than 75 veterans in 16 states. Just as rewarding was the opportunity to meet and know first hand the men who made history. For Veth, it has also been an emotional time. He noted, “This was a war everyone wanted to forget and veterans were reluctant to tell their very private stories. Listening to their memories certainly was touching.”
While the documentary includes conversations and recollections of many to whom the pair spoke, it is further highlighted with actual videos of the war and commentary by the veterans themselves. One of the highlights of the film also recounts the story of Larry G. Dahl, a 21-year old machine gunner from Oregon. Dahl was the posthumous recipient of the Congressional Medal of Honor for his heroic actions on a gun truck that saved the lives of fellow soldiers.

For further information on the upcoming documentary, visit smithsonianchannel.com. Or go to: https://vimeo.com/242572250 to see a video on what Gun Trucks are about.