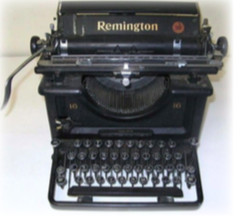 That author Mark Twain was one of the first people to purchase the early typewriter and is probably the first author to submit a typed manuscript to his publisher.

The QWERTY keyboard layout was devised and created in the 1860s by the creator of the first modern typewriter, Chris- topher Sholes, a newspaper editor who lived in Milwaukee. Originally, the characters on the typewriters he invented were arranged alphabetically, set on the end of a metal bar which struck the paper when its key was pressed. However, once an operator had learned to type at speed, the bars attached to letters that lay close together on the keyboard became entangled with one another, forcing the typist to manually unstick the typebars, and also frequently blotting the document. A business associate of Sholes, James Densmore, suggested splitting up keys for letters commonly used together to speed up typing by preventing common pairs of typebars from striking the platen at the same time and sticking together. When a key was struck, the typebar would swing up and hit the ink- coated tape, which would transfer the image onto paper.
Someone who mastered this new key arrangement would actually be able to type faster because the keys wouldn’t jam. This was the beginning of the QWERTY keyboard, which first appeared in 1872 and is still used today on modern day computer keyboards.
The first typewriter machine found its way on the market in 1874 through E. Remington & Sons. The device was called the Remington No. 1. It wasn’t a very big hit. People just weren’t ready for mechanical writing. E. Remington and Sons were also well known for their firearms.
Four years later after some modifications to the arrangement of the keyboard, Remington and Sons produced the new Remington No. 2 model, which in- cluded the arrangement we use today, but it now had the ability to type both upper and lower case letters thanks to the shift key. Although the original shift key caused the carriage to shift positions, the term is still applied today to modern day shift keys on the computer keyboards even though they do not move.
After the Remington 2 typewriter came out, the typewriter started to rise in popularity, especially in businesses. There were other attempts at replacement keyboards but the QWERTY keyboard prevailed. In case you haven’t noticed, the name QWERTY comes from the first six letters of the first row of keys on a standard keyboard.
Frank McGurrin, a court stenographer from Utah is considered to be the first person to memorize the QWERTY keyboard and master touch typing. He rose to fame by participating in many typing contests and is credited for sparking people’s interest in purchasing typewriters.
We’ve come a long way from fixing ribbons on typewriters, using carbon paper to make copies, unjamming keys, and using liquid white out, but the good old QWERTY keyboard is still around!