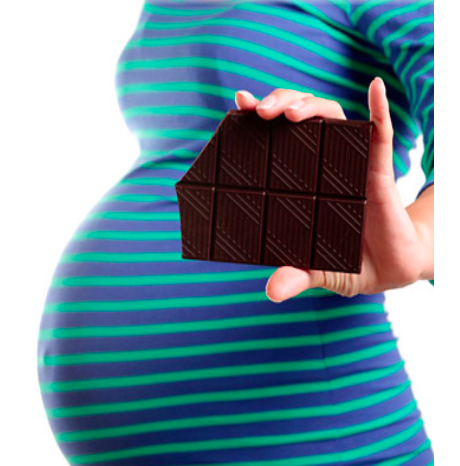 Pregnant women who nibble just a small piece of choc- olate each day may improve the circulatory health of their unborn child, a new study suggests.
The tiny treat may also reduce the risk for preeclampsia, a potentially deadly condition in which a pregnant woman with normal blood pressure suddenly develops dangerous- ly high blood pressure, the researchers said.
The findings held up regardless of whether the chocolate consumed contained high or low amounts of so-called fla- vanols. Some experts believe these compounds — found in certain plant-based food items — may confer a number of health benefits.
But the association seen in the study did not prove that eating chocolate during pregnancy caused better circulato- ry health in pregnant women and their babies.
“Our observations suggest that a regular small consump- tion of dark chocolate — whether or not the level of flava- nol is high — from the first trimester of pregnancy, could lead to an improvement of placental function,” said study author Dr. Emmanuel Bujold. He is a professor of obstet- rics and gynecology at Universite Laval in Quebec City, Canada.
And at least one nutritionist said she wasn’t ready to em- brace the study’s findings.
Flavanols are naturally present in large quantities in un- processed cocoa. However, they have a somewhat bitter taste and some of the techniques used to turn natural cocoa into tasty cocoa powder or chocolate (such as fermenta- tion) can result in a significant loss of flavanols, experts say.
For consumers, knowing when a piece of chocolate does or does not have a high amount of flavanols can be tricky.
That said, Bujold’s team decided to see whether differ- ences in flavanol content had any effect on the pregnancies of nearly 130 women.
All of the women in the study were at the 11- to 14-week mark of their pregnancy, and carrying one child.
All were instructed to consume 30 grams of chocolate (a little more than one ounce) each day over a 12-week peri- od. That’s equivalent to about one small square of choco- late per day, Bujold said.
Half of the women consumed high-flavanol chocolate, while the other half were given low-flavanol chocolate. All were then tracked until their delivery date.
Regardless of which type of chocolate was consumed, the women faced the same risk for both preeclampsia and rou- tine high blood pressure. Placental weight and birth weight was also the same in both groups, the investigators found.
Similarly, fetal and placental blood circulation levels, as well as in-utero blood velocity, did not appear to be affect- ed by shifting flavanol levels.
However, simply consuming a small amount of chocolate — no matter what the flavanol content — was associated
with notable improvements in all blood circulation and ve- locity measures compared to the general population, the researchers said.
Bujold said this suggests that there’s something about chocolate, apart from flavanol levels, that may exert a pos- itive influence on the course of pregnancy. Finding out ex- actly what that is “could lead to improvement of women’s and children’s health, along with a significant reduction of treatment cost,” he said.
However, he added that the “consumption of chocolate must remain reasonable during pregnancy, and caloric in- put has to be considered in the equation.”
That point was seconded by Lona Sandon, an assistant professor in the department of clinical nutrition at the Uni- versity of Texas Southwestern Medical Center at Dallas.
“This is not a license to go wild with chocolate,” she said. “Keep in mind the amount of chocolate was only 30 grams, or one ounce. That is just a few bites. Piling on the choc- olate bars may pile on the pounds beyond what pregnant women would be advised to gain,” Sandon warned.
“Also, there are plenty of other nutrients that pregnant women would be better off focusing on for proper growth and development of the baby,” Sandon said, “such as folate, calcium, protein and iron from quality food sources.”
Her bottom-line?
“Enjoy a little good chocolate from time to time,” San- don said. “But I am not recommending it yet for a healthy pregnancy.”
For more information on this study and findings visit www.healthfinder.gov.