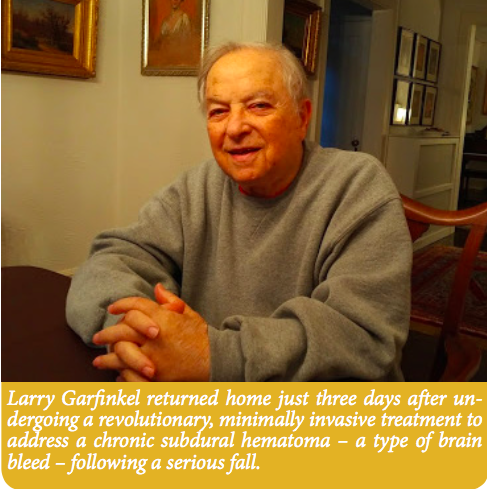 A revolutionary procedure gave way to a quick recovery for Larry Garfinkel, 87, after a fall outside his Summit, New Jersey home. When Larry Garfinkel, former VP of International Public Affairs at AT&T, arrived at Overlook Medical Center, he didn’t know what his diagnosis – or his treatment options – would be. Earlier that day, he was walking up the back steps to his home in Summit, New Jersey, when he tripped and fell back- ward onto a cold, unforgiving driveway. “My head was in pain, so I called 911, and they transported me to the hospital for observation,” recalls Larry. “After undergoing several CAT scans, the doctors told me I had a chronic subdural hematoma, a type of brain bleed, as a result of the fall.”  “Subdural hematomas occur when blood vessels rupture and leak fluid between the brain and the covering of the brain, oftentimes after a serious fall or trauma to the head,” explains Dr. Ronald Benitez – a board-certified neurosurgeon and president of Atlantic NeuroSurgical Specialists
(ANS) – who treated Larry at Overlook. “This forms a hematoma – a collection of blood outside of the blood vessel– which exerts abnormal pressure on the brain and can cause a stroke.”
Subdural hematomas made headlines in early 2018 when news broke about “Jeopardy” host Alex Trebek undergoing sur- gery to remove blood clots in his brain following a fall in October 2017.
“While acute, or severe, cases are dangerous because of how quickly bleeding fills the brain, chronic, or less severe, subdural hematomas – like what Larry had – are also very dangerous because it may take weeks or months for symptoms to appear from slow bleeding,” adds Dr. Benitez. One of few neurosurgeons specializing in both the surgical and endovascular management of cerebrovascular disease – conditions affecting blood vessels in the brain and cerebral circulation – Dr. Benitez offered Larry an alternative to an open craniotomy called middle meningeal artery (MMA) embolization. This new, minimally invasive procedure enables surgeons to reach the brain through an incision near the groin and navigate a small catheter up into the blood vessels in the brain that are causing the bleeding. They can then inject small particles, called embospheres, to stop the bleeding. “Dr. Benitez explained this procedure was less intrusive and would lead to a shorter recovery time,” recalls Larry. “While it’s a very new approach, it’s also very appealing. Dr. Benitez was confident this would be highly effective for me, and he fulfilled his word.” Larry’s hour-long surgery – the second MMA embolization ever performed in New Jersey – was successful, and he returned home from the hospital three days later. He experienced no significant pain, no headaches and a relatively short recovery period. Within a month and a half, all of the blood that had accumulated in Larry’s brain had dissipated, and he was given the all-clear from Dr. Benitez. “From my perspective, the treatment was very simple and very effective,” closes Larry. “As far as I’m concerned, Dr. Benitez is a miracle worker.” Atlantic NeuroSurgical Specialists (ANS) is New Jersey’s largest neurosurgical practice and one of the most advanced in the country. Since its founding in 1958, ANS has specialized in the diag- nosis and treatment of disorders affecting the nervous system. For more information, visit www. ansdocs.com.