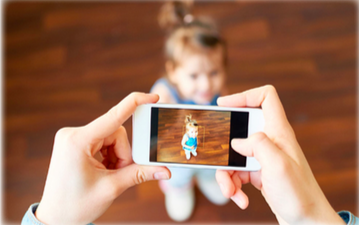 In today’s society it is encouraged to post your children all over social media. Family members and friends love being able watch your kids grow, since it happens so quickly. Parents post innocent pictures of their children playing in the park, bathing, laying on the beach and without thinking they hashtag something cute and catchy. The issue with these hashtags is that it gives a direct route to the picture of your 3-year-old daughter exposed on the beach. David Angelo, the Chairman of the Child Rescue Coalition ad- mits pedophiles search for hashtags such as; #BathTime, #NakedKids #Bi- kiniKids and #NakedKidsInaTub #ToiletTraining to easily access pictures with this content.
April is National Child Abuse Prevention month and this year the Child
Rescue Coalition also launched its Kids for Privacy Campaign. The reason
being, parents are naive, they do not realize how easy it is for these pictures to be saved, downloaded and reposted by the wrong people. The Child Rescue Coalition mentions how research has found that by age 2, 90 percent of children already have a presence on social media.
The importance of spreading awareness on this topic is imperative. Child predators exist everywhere and they are doing more than distributing pornography. The internet has made stalking and communicating way too easy for people with the wrong intentions. Pedophiles can stalk children, share information and trade tips and techniques on how to seduce and lure them into sexual encounters.
The campaign was successful in educating parents on the potential dangers of exhibiting the vulnerability of their chil- dren. Despite the privacy of your account, the campaign suggests asking yourself a few questions before posting a picture. “Why am I sharing this?”, “Would I want someone else to share an image like this of me?”, “Would I want this image of my child viewed and downloaded by predators on the Dark Web?” and “Is this something I want to be part of my child’s digi- tal life?” Once a photo is uploaded, it is out of your control. It is time to become more conscious and continue to spread awareness on this topic.