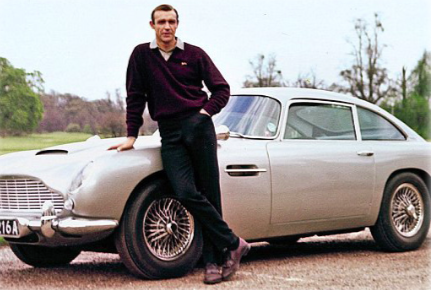 James Bond fans will be excited to hear that the Goldfinger DB5 is on its way, with 25 of the cars to be manufactured for the public. The return of the iconic DB5 represents collaboration between Aston Martin and the company in charge of producing the James Bond films, EON Productions.
To keep everything as authentic as possible, the cars will be built by Aston Martin Works at Newport Pagnell where the DB5s were previously assembled. They will be authentic reproductions of the DB5 seen on screen, with some sympathetic modifications to ensure the highest levels of build quality and re- liability. This authenticity will extend to include functioning gadgets such as revolving number plates and more, which were made famous in Goldfinger.
The gadgets will be co-developed with Oscar®-winner Chris Corbould, special effects supervisor from the James Bond films.
Officially sanctioned by Aston Martin and EON Productions, all the Goldfin- ger edition cars will be produced to one specification – Silver Birch paint – just like the original.
The DB5 made its first appearance in the third James Bond movie, Goldfinger, alongside Sean Connery as James Bond, pictured above.
Loaded with gadgets and armaments installed by Q Branch, the secret agent’s Aston Martin became an instant hit with moviegoers.
The DB5 was also featured in six additional movies after appearing in Goldfinger (1964): Thunderball (1965), GoldenEye (1995), Tomorrow Never Dies (1997), Casino Royale (2006), Skyfall (2012), and Spectre (2015).
Each Goldfinger DB5 continuation car will be priced at about $3.5 million. First deliveries to customers will commence in 2020.