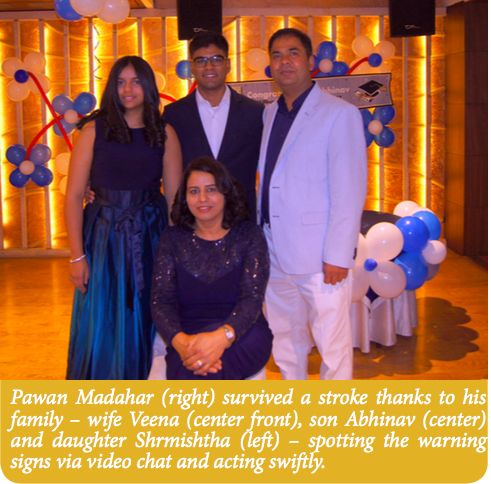 As Pawan Madahar was getting ready for work, a video call came through from his wife and kids, who were vacationing in India. He accepted the call, but he was physically unable to speak.
Suspecting a poor internet connection, Pawan’s wife Vee- na called again. This time, she could see he was grabbing his jawbone when he was trying to speak. That’s when she real- ized Pawan was having a stroke.
Unable to dial 911 internationally, Pawan’s family frantical- ly enlisted the help of friends in the U.S. to contact emergen- cy responders.
“I am so grateful Veena had the insight to recognize that I was experiencing a stroke. I had no idea what was going on, and I clearly couldn’t call to ask for help myself,” he contin- ues.
Medics transported Pawan to the Atlantic Neuroscience Institute at Overlook Medical Center where Dr. Ronald Beni- tez, a board-certified neurosurgeon at Atlantic NeuroSurgi- cal Specialists (ANS) and stroke specialist, was on call in the emergency department.

  Utilizing a state-of-the-art device called a stent retriever,
Dr. Benitez successfully removed two life-threatening blood clots from Pawan’s brain, restoring blood flow in just 30 minutes.
“With stroke patients, we’re in a race against time to restore blood and oxygen to blocked areas of the brain,” says Dr. Benitez.
According to the National Stroke Association, more than 750,000 people experience a stroke every year. It is the top cause of adult disability in the U.S.
“Despite how frequently strokes occur, many people are not familiar with the warning signs, which include speech impair- ment, drooping or numbness in the face and weakness or numbness in the arm,” Dr. Benitez adds.
When Pawan was released from the Intensive Care Unit, he was reunited with his family. They were relieved to learn he would make a full recovery.
“Thanks to Dr. Benitez and my family, this has just been a bump in the road – and not the end of the road for me,” Pawan shares.

Atlantic NeuroSurgical Specialists (ANS) is New Jersey’s largest neurosurgical practice and one of the most advanced in the country. For more information, visit www.ansdocs.com.