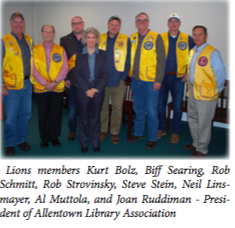 In the past year, the Allentown Public Library has completed projects that reached back into the 19th century and forward into the 21st century. At an event held at the Library on November 4th, friends of the Library celebrated the renovation of the Community Room, the restoration of the foyer, and the digitization of the Messenger/ Messenger-Press newspapers from 1903-2008.
The Allentown Lions Club was thanked for transforming the Community Room with new ceiling, wainscoting and trim, and upgrading the kitchenette, which was dedicated as their Centennial Project in honor of the 100th anniversary of the Lions International Organization. The work was done by Lions members and paid for in full by the Club.
In her remarks, Allentown Public Library Association, President Joan Ruddiman, thanked the Lions for decades of support for the Library. “Since the Allentown Lions was founded in 1939, the Club has been at the forefront in helping the Library to grow. With generous donations of their time and talent, as well as money, the Lions have made sure this community has had a Library.”
On permanent display in the Community Room are the Allentown Lions Club origi- nal charter, memorabilia, and a plaque acknowledging the Centennial Project.
The guests also admired the completion of the foyer, which was funded by a matching grant from the New Jersey Historic Trust. The original 19th century exterior doors and the original floor boards have been restored, the walls and ceiling rehabbed painted, and lighting upgraded. The custom interior doors with windows have dramatically changed the entryway as patrons’ transition from the 19th century exterior to the 21st century library within.
Carrie Hogan, project manager for the Trust, was thanked for her support of the project. She commented that the cost of a project does not reflect the impact, noting that though this was a relatively small project for the Trust, it has a significant influence on the building.
The third major project completed in 2018 was digitizing the Library’s collection of Messenger and Messenger Press newspapers, which are now available at the newspa- pers.com site. In attendance to celebrate this accomplishment was Elizabeth Olson,
the granddaughter of the founder of the Messenger, J.W. Naylor, and daughter of the 2nd owner and editor, Ellis Hull. The portraits of these two men are on perma- nent display in the Community room in appreciation of their efforts in promoting and helping the Library to grow from 1903 through the 20th century.
The Monmouth County Historical Association, particularly Joe Hammond, Director of Collections, and Joe Zemla, Assistant Lions members Kurt Bolz, Biff Searing, Rob Curator of Collections, were thanked for Schmitt, Rob Strovinsky, Steve Stein, Neil Lins- taking on the project of getting the news mayer, Al Muttola, and Joan Ruddiman – Presi-papers on line. Mrs. Olson and her family dent of Allentown Library Association years ago had donated the bound copies of
the papers and the microfilm with the copyrights to the Association. When the As- sociation realized that the Library was seeking to have the collection digitized, they prioritized this project, which is part of the Association’s commitment to digitize all the newspaper collections held by the MCHA.
Dr. Ruddiman also thanked Joe Eisele, publisher of Media Group, for help in obtain- ing the copyrights, and with the help of Gregory Gill of the New Jersey State Archives, locating microfilm from the years the Messenger Press was published by the Princeton Packet.
Joan Halle, former owner of the Messenger-Press, was also instrumental in the success of this project by providing copyrights and a complete collection of untouched micro- film from the years Joan and husband Bob Halle owned and edited the paper.
The Messenger and Messenger-Press collection from 1903-2008 is now available on line free of charge through the Library’s subscription to newspapers.com. Please visit the Allentown Public Library at 16 S. Main Street.