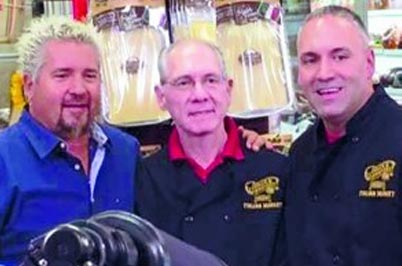 Dolce and Clemente’s Italian Gourmet Market in Robbinsville was chosen to appear on The Food Network Channels television show, Diners, Drive-Ins and Dives, hosted by playful and energetic Guy Fieri.

The show was originally slated by the Food Network to begin taping about the same time as Hurricane Sandy belted the east coast, prompting the decision of the network to hold off taping shows in the affected areas in order to give people time to recover from the storms extensive damage.

The call from the network to include the Gourmet Market in one of their shows came again in 2016. The restaurant owners, Frank Dolce, and son- in- law, Joe Clemente, along with co- workers, family, and friends, greeted Guy and his crew for a two-day taping of the show back in July.  The first day, family and friends were allowed to spend some time with Guy and his crew, but on the second day of shooting, the set was closed.  Frank and Joe made over thirty of their specialty dishes for Guy and his crew to sample, leaving Guy to pick the food items that he would showcase on that episode of the show.

The format of Diners, Drive-Ins and Dives is simple.  In every episode, Fieri visits about three casual-dining restaurants and spends time with the chefs, watching as they prepare their most popular menu items from start to finish. It’s a part-travel show, part-cooking show, part-hangout. What makes it fun to watch is Fieri’s bubbly personality and his interactions with the owners as they prepare a dish in front of the TV audience.  The mere presence of a restaurant showcased on the show brings in an onslaught of curious patrons afterwards who want to taste the cuisine for themselves. It’s a win-win situation for the restaurateurs.

The first shots of the show have Fieri coasting by in his own red 68 Camaro, which occasionally gets trucked in for locations, although it’s been said that they have stand-in Camaros placed in strategic areas of the U.S. for the further out locations.

Close family friends, Stacey Ferante and her husband, hosted a premiere party on January 20th at their home in Old Bridge. With over sixty guests in attendance, they gathered around to watch the airing of the show and feast on some of Frank and Joe’s specialty food items.

With years and decades of culinary experience behind them, Frank and Joes venture in Robbinsville began in 2008 when they opened up the Italian Gourmet Deli and Market, which is located at 2 North Commerce Square.

Taking along special values that he learned from his grandmother, Joe never forgot that opinions count, and that no matter what, you should always try to improve, even on the food that you serve. The two men are proud of their heritage and know the importance of family. They also value their community and strive to bring their patrons the best food and the best service possible.

If you’re in the area, stop in and see for yourself why people keep coming back to Dolce and Clemente’s Gourmet Italian Market; a place where customers feel like part of the family.  For more information about the market, go to: www.dolceandclementes.com.